Behind The Lens: Lindsey Byrnes

Tune-in to our Instagram Live tomorrow, Thursday, April 15th at 3pm PT, to join Lindsey in conversation with Hayley Williams of Paramore

Live Nation's Behind The Lens features predominant & up-and-coming concert photographers sharing their most memorable concert experiences and much more. Joining us for this month’s series is Los Angeles based photographer and Creative Director Lindsey Byrnes.

Throughout her career Byrnes' work has offered intimate and eye-opening insights into some of the biggest brands and artists in entertainment. With a portfolio that has been celebrated and published worldwide by the likes of Rolling Stone, Thrasher, NYLON, and global media and entertainment outlets, Lindsey Byrnes has become one of the most integral, trusted, and creative personnel within her industry, creating a safe, honest, and expressive space for her clients, where anything is possible. 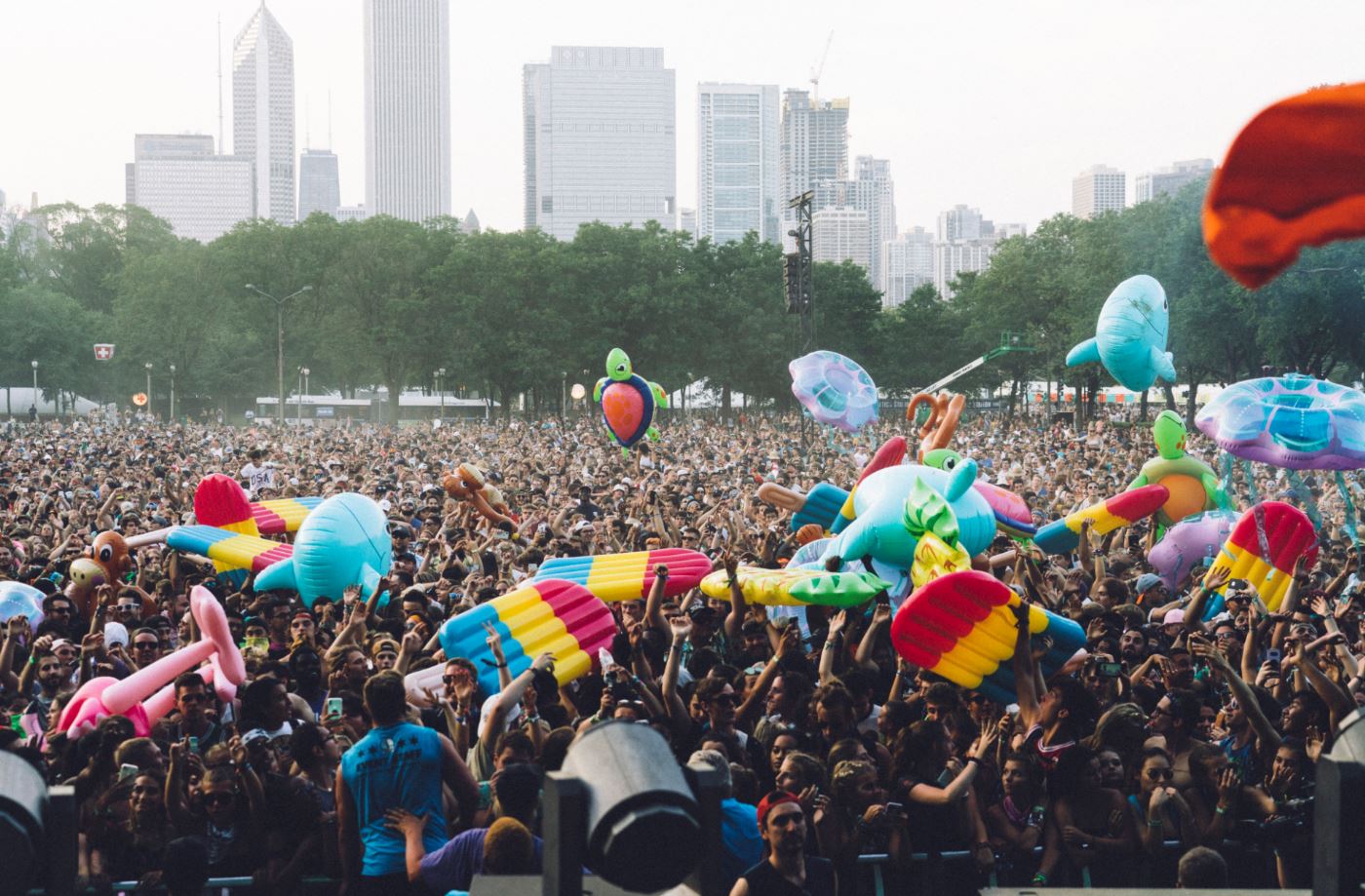 "I’ve always loved shooting music festivals. Truly festivals are one of the reasons I became a photographer full time. The energy of the crowd and the bands combined with the feeling of togetherness of thousands of people all there to enjoy and experience live music; it's something that cannot be mimicked anywhere else. I love these images, I've truly missed this feeling and cannot wait to be in a sea of sweat again soon." 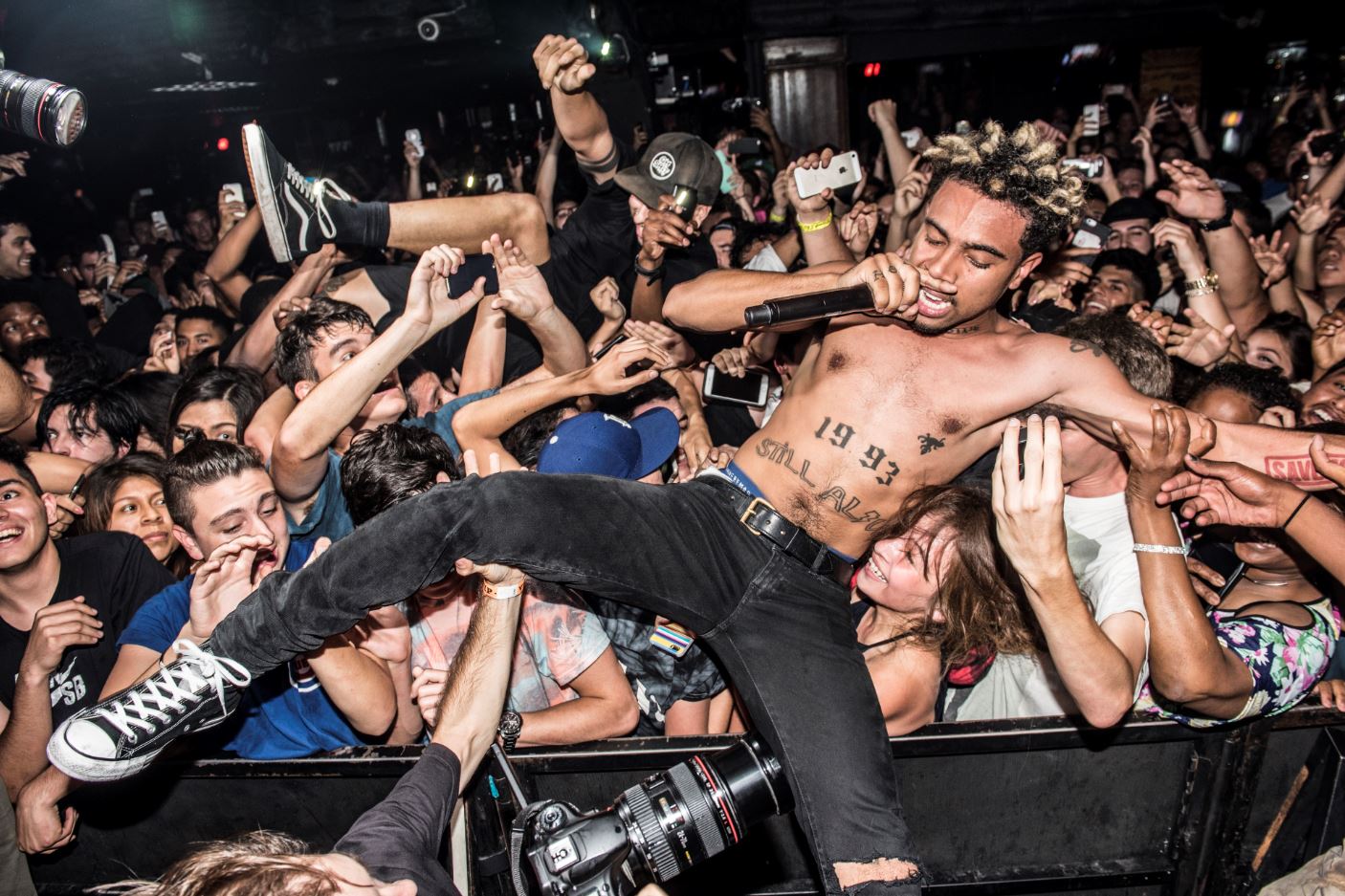 "I was commissioned to shoot Vic Mensa for a Fader x Converse ad, thanks to Karac. The assignment was to shoot a combination of portraits and live. This is one of the outtakes and one of my favorite images that came out of it. The Echoplex in Echo Park is probably my second favorite venue to the Echo which is located upstairs. It reminds me of San Francisco and you never know who is going to play there. Vic is an incredible performer and although being on stage while shooting is not something that I really ever do, because I never want to distract from the fans experience, this show was different. Vic had a group of us up on stage and nobody seemed to care. It felt like we were adding to the vibe. When I get to shoot from a POV that is unique, it really feels like I am doing a service rather than just capturing a moment, if that makes sense?" 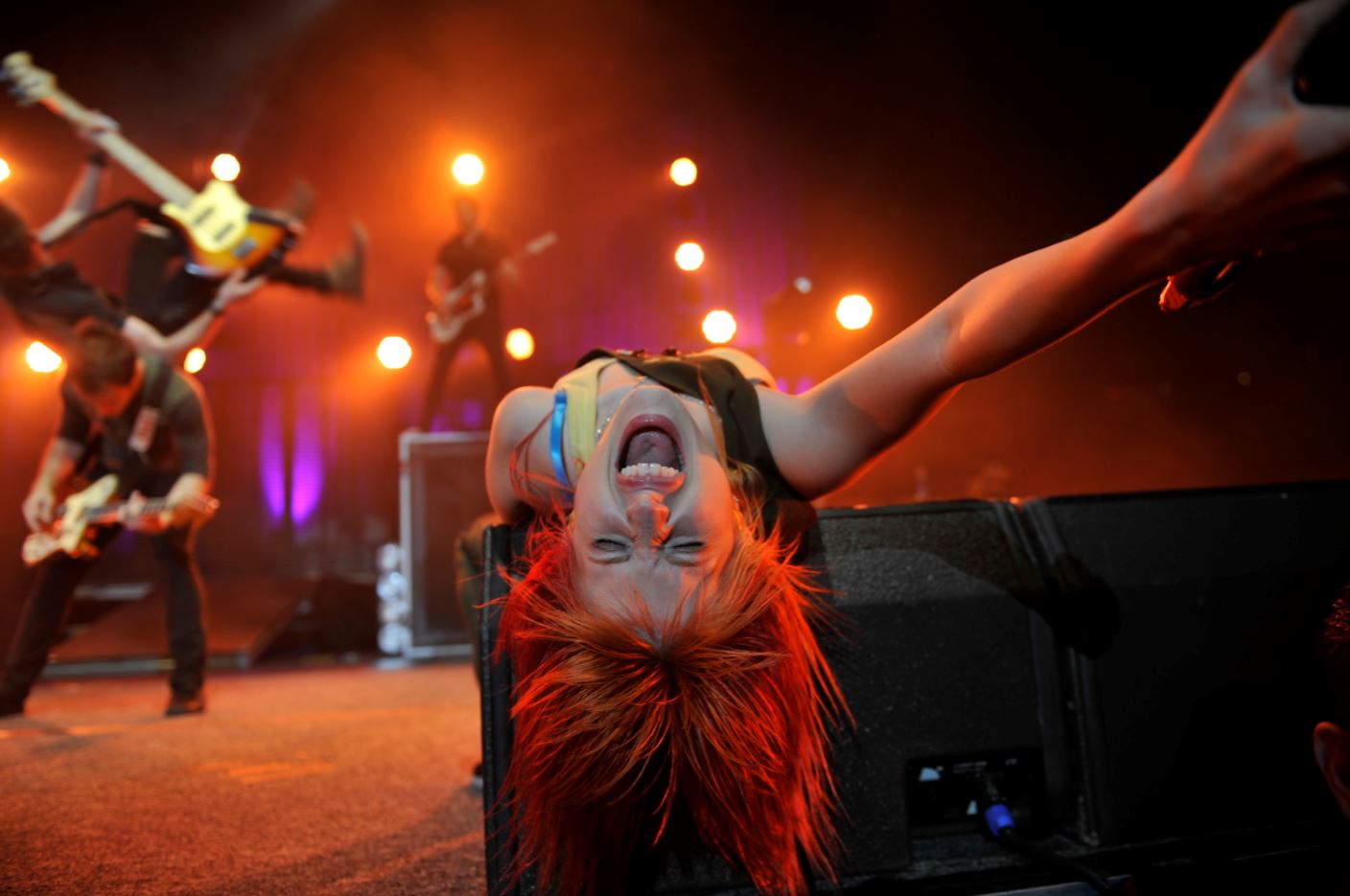 "I shot this photo of Paramore September of 2010 while on tour with Tegan and Sara, who were main support on the Honda Civic tour. This was the last stop in Anaheim. I was excited to shoot Paramore because I loved their music and their performance was so fun. Super high energy and never a dull moment. This was no different, I had been shooting so much that my memory card was almost full, when their photographer said to me “hey they are going to do the flip, right there”.  So I flipped my camera into JPG mode to make room and shot a sequence. I don’t even have the raw image of this!!! I didn’t really have a hold on social media at that point, but I put the photo up on my Tumblr and it got a lot of attention. I think that it made its way back to the band, because when they were in need of new promos I was asked to shoot them and that was when I started developing a creative connection with them. And 11 years later we are still working together." 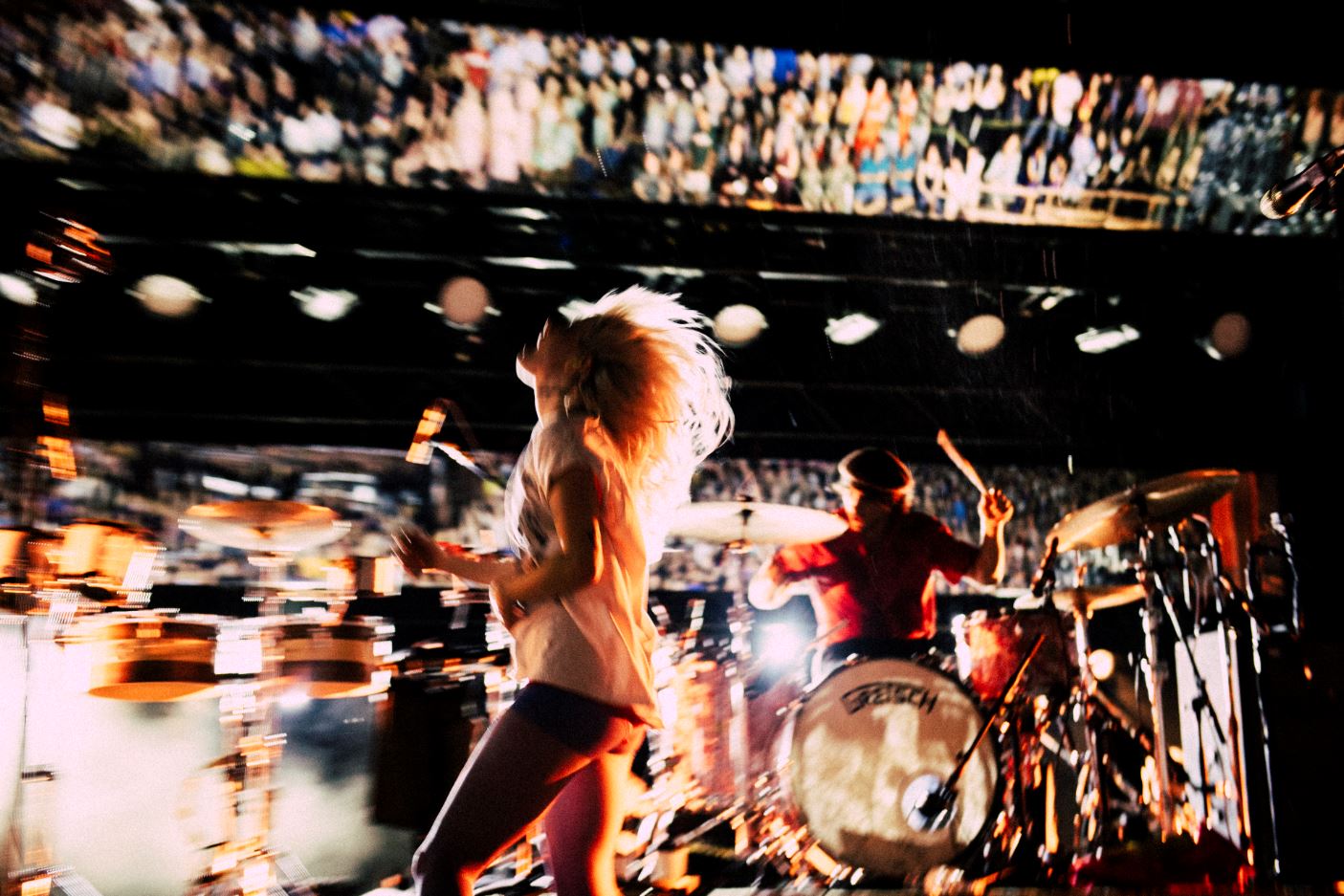 "Red Rocks is a legendary venue probably one of the most sought after bookings and I was asked to come out and shoot for Paramore in 2018. The bill was amazing: Paramore, Foster the People and JaySom.  The beauty of the venue cut out of the rocks was completely breathtaking, or maybe it was the altitude. Probably both. Paramore took the stage and everyone went completely bonkers. I was so close to the stage, Hayley could get inches from my camera lens, those are the moments I live for!  The fans were losing their minds the entire time, as was I. They probably played for close to two hours and every moment was built upon the last, when it got close to the end Hayley went into the crowd and danced with her fans. At one point she held a young girl's hand, who’s mother was behind her. They were both wearing Paramore shirts. What the heck?, how cute is that? When I realized that the mom was wearing a shirt that had a photo I shot on the front of it, it was too much for my sappy heart. Cuteness overload." 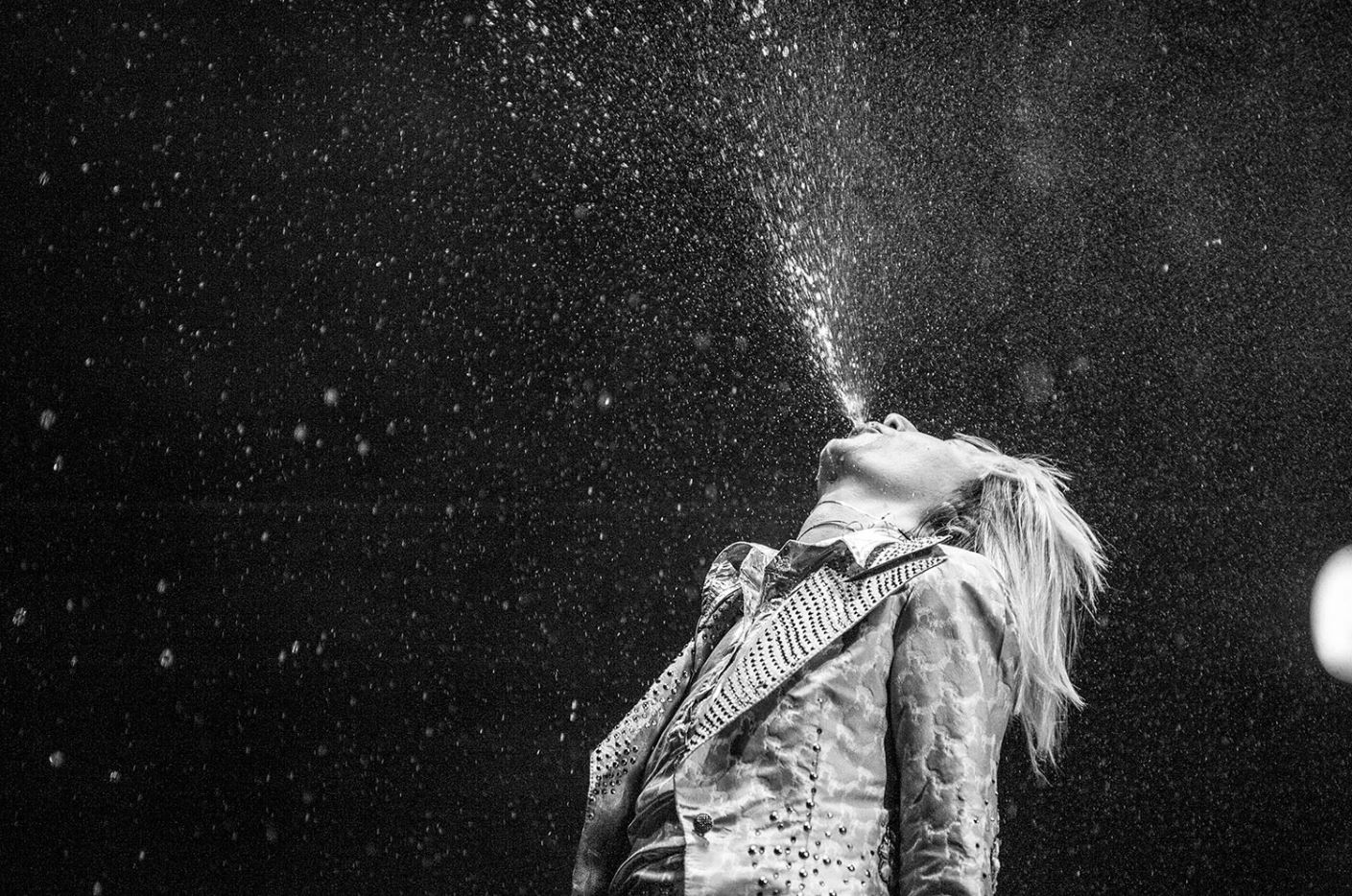 "I  was hired by Spin Magazine (shout out  Jolie Ruben) to shoot Coachella. I always loved Spin Magazine and I was really excited that they were trusting me to shoot this massive festival. It is wild to me that this was 2013 so much has happened in these since then. However, what hasn’t changed is my love of the Yeah Yeah Yeahs. They are really just so cool, aren’t they? This moment that I was able to capture was the kind of moment that I live for, when I just know that I got something special and that I didn’t blow it… A time to rejoice because I will get to re-live this moment anytime I want, all I have to do is look at my Twitter profile header, because it has been there for years."

"Shooting Haim at the Greek was a highlight for me. I had no idea they were going to come up to the soundboard to perform until there was a break and I saw what looked like a little stage up in the middle of the crowd . Where do I stand, what do I do kept running through my head.. I know it was going to look beautiful and if I stood in the right place and I ran the risk of missing whatever was going to happen. This is always the fear I have. I used to joke that I was writing a book called “all the shots I missed” and it was going to be a list of all the moments that I wish I had captured with stick figure drawings from my memories. Because that is what happens during a show for me. I will take photos with my mind, of moments I wasn’t able to actually capture… This was not one of those entries in my book." 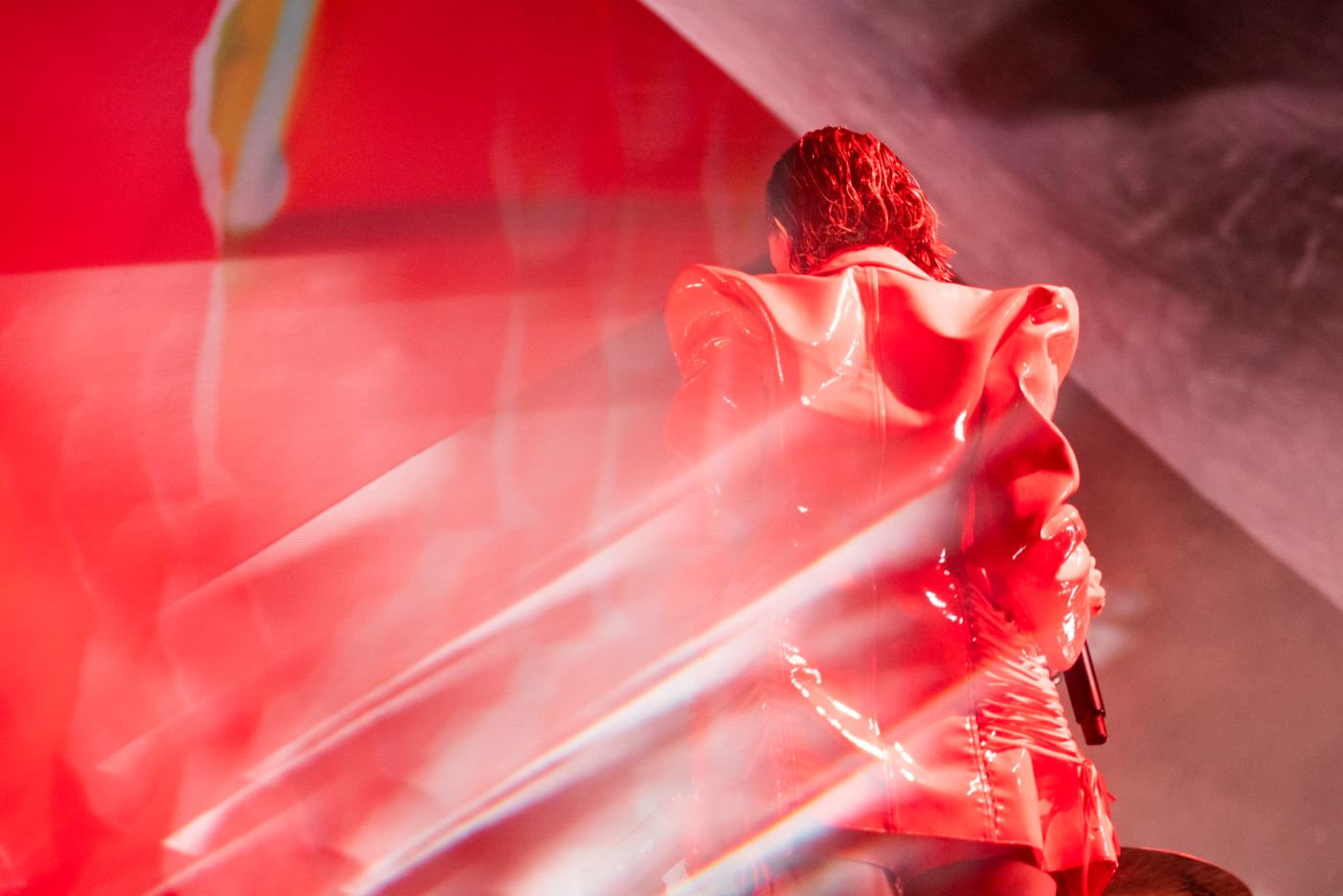 "When I heard about this all female line up for a first year festival in 2019 called Yola Dia  I had to think for a bout 0.05 seconds before exclaiming “I’m there!”  Lykki Li headlining and I had never seen her perform. I shot both film and digital during this set. It seemed like it would be a really great chance for me to use some prisms based on the stage and the lighting. I really love how the reds and whites looked once the prisms were used. Lykki Li puts on such an amazing show." 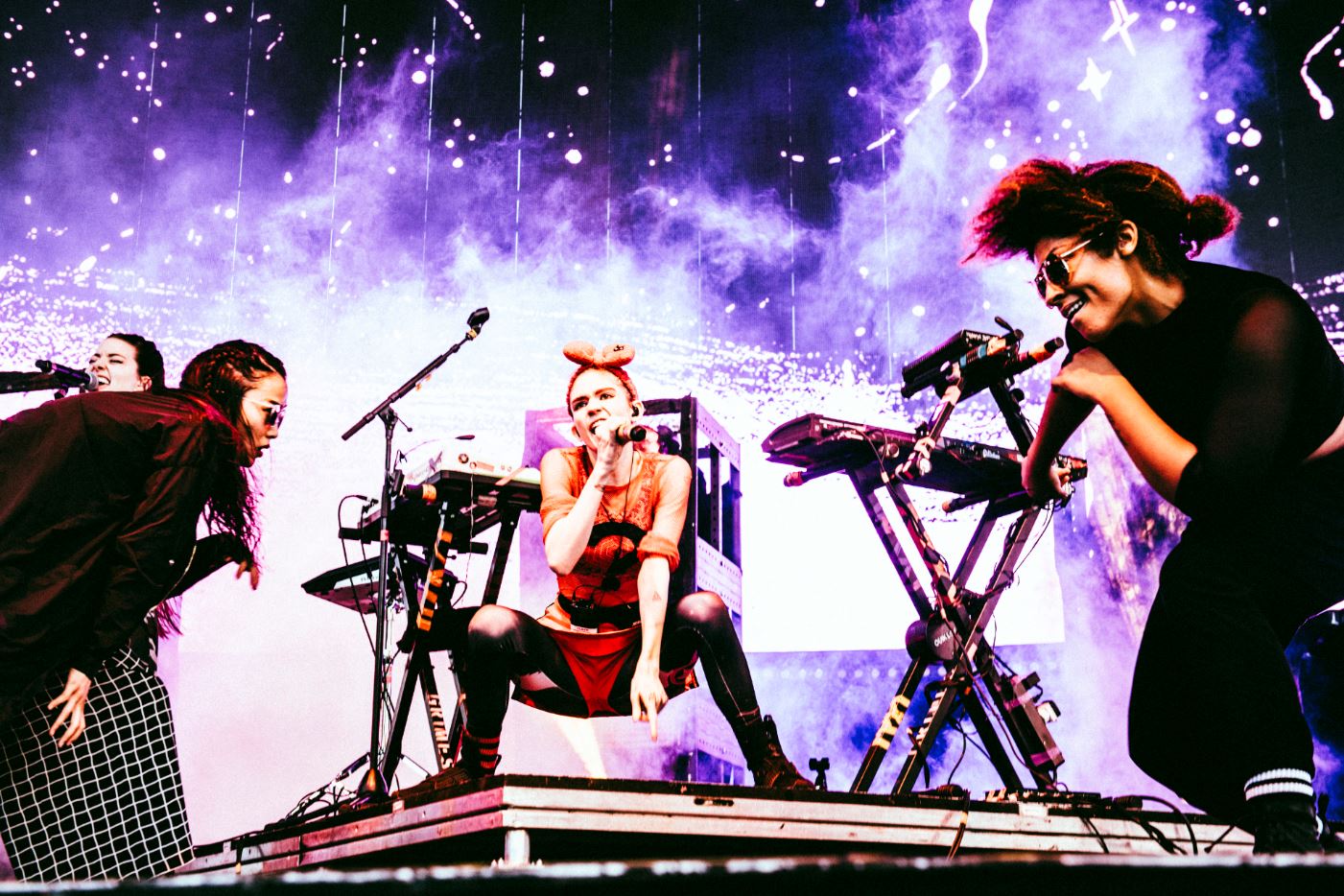 "I  really love Grimes’ music and I’ve seen her perform a few times. This show I felt a lot of pressure because there were only a few people who were approved to shoot it. When that happens I feel the weight of the world. But as soon as she came out everything melted away except the music. I was allowed to shoot the first three songs only and I really wanted to make sure that I captured her dancers because they were incredible." 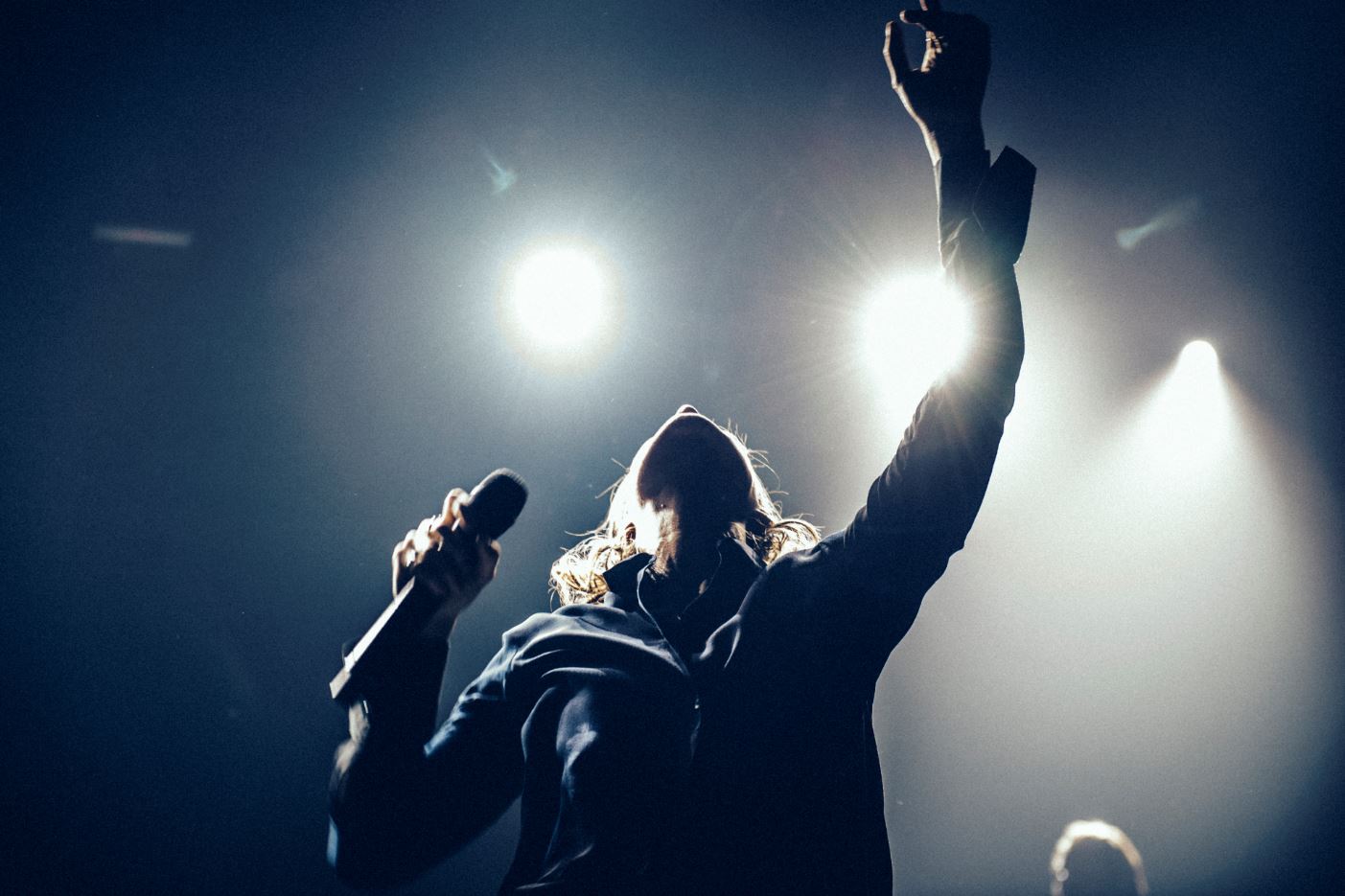 Christine and the Queens

"I was watching the 3rd season of Girls on HBO and the credits started to roll when I heard the first bars of IT by Christins and the Queens. Wait a minute, did I discover one of my favorite bands from the end credits of a television show? YES, yep I'm the reason and proof as to why syncs for TV and film have become so sought after. I immediately bought the record and a few months later I was in New York and heard they were playing at Terminal 5. I cancelled all my plans and headed out to the show. This is my dream as a photographer to get access to shoot a band that I had recently become obsessed with." 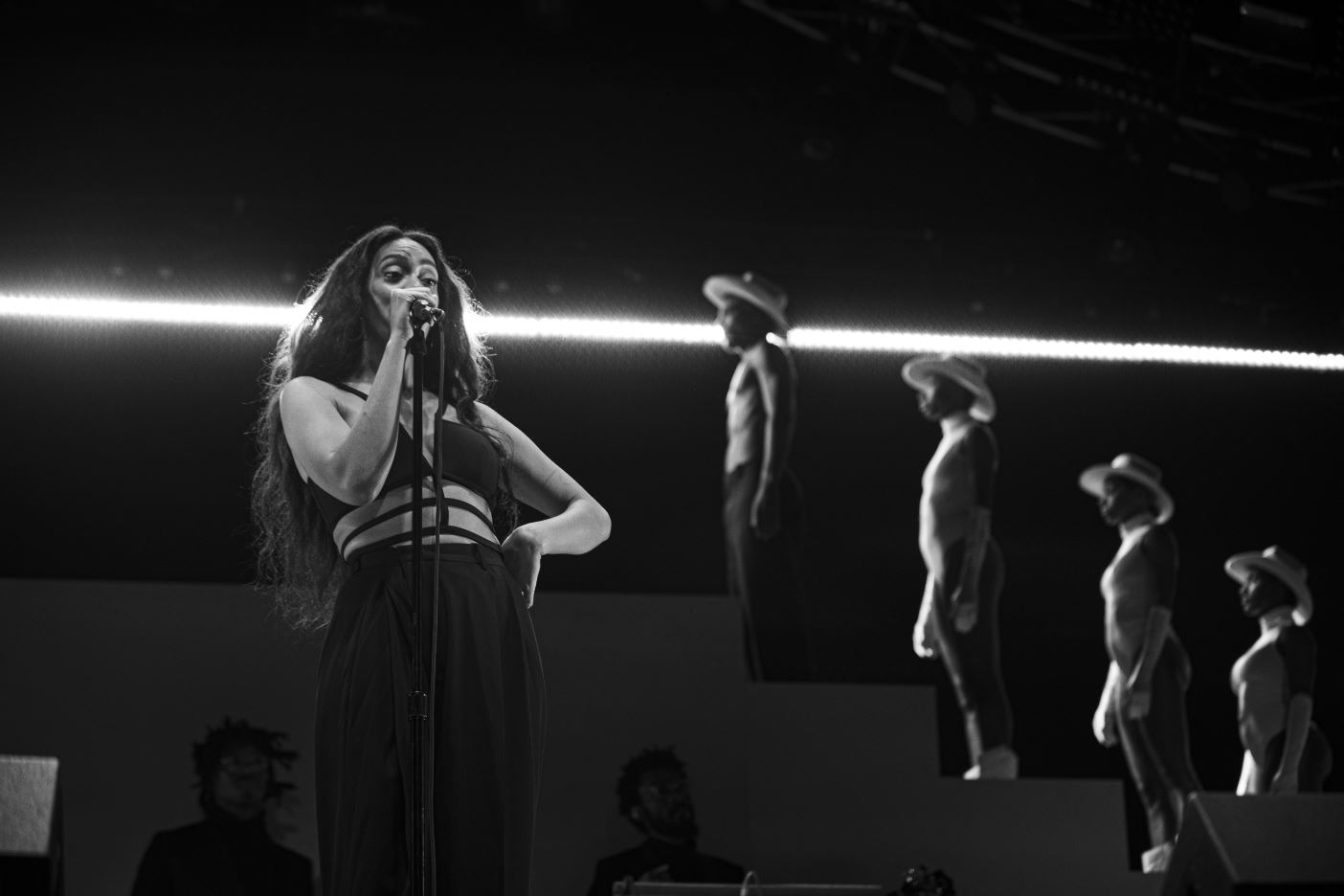 "Bonnaroo is one of my favorite festivals. I'm so excited that it was just announced that it is coming back. I went in 2019 and if I could have made plans for the next year the day it ended I would’ve, sign me up! Their line up was really female heavy comparatively to other festivals that year and I love that!  Solange was an artist that I'd never seen perform and this was a great opportunity. The stage was really high and I'm really not very tall, a disadvantage for festival shooting, and an advantage for doing the limbo at parties..,as soon as she came out to stage and I saw the dancers and lights I knew that I wanted to capture the whole stage . I am pretty sure I was holding my camera above my head for this photograph and trying my best to not get in any fans' way, maybe security told me to stop standing on the barricade, but I cannot confirm or deny."

"The idea for the cover of Hayley’s second solo record, FLOWERS FOR VASES/descansos was created, the same way a lot of our work together has been. It started out with us hanging out and talking. I think this time we were really just into the idea of making her jacuzzi something that was more than just an awesome place to hang. Why not use this as part of the story, because in truth it was a huge part of her process. Hayley doesn’t really do anything in jest. Buying a jacuzzi was part therapy and part impulse but in whole it was the best location we could have ever dreamed up .  I honestly get choked up every time I really think about my connection with Hayley. I feel so lucky to have her in my life. I am a total fan."