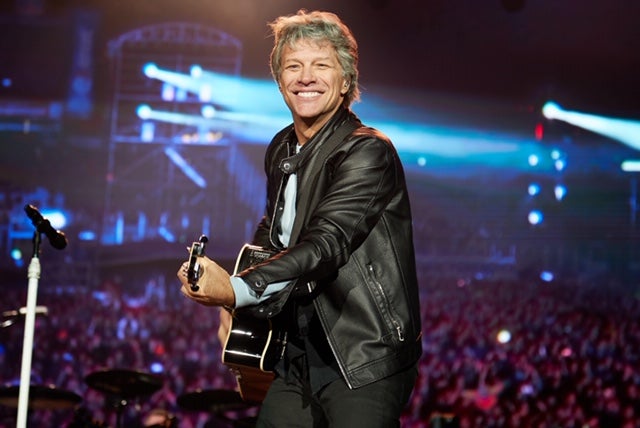 Fans can ORDER their own bottle at hamptonwaterwine.com to support the cause and use the code LIVE10 to receive 10% off your Hampton Water purchase.*

For the month of August, Jon Bon Jovi and Jesse Bongiovi’s famed rosé wine company, Hampton Water, will kick off it's charitable partnership with World Central Kitchen (WCK). $1 from every purchase will go to the WCK organization in an effort to help combat hunger & poverty around the world, given the recent impacts of COVID-19. All proceeds will go to minority owned businesses.

To celebrate, Jon and Jesse will sit down for a pre-show virtual happy hour and wine tasting hosted by Live Nation on Friday, August 14th at 6:30pm ET / 3:30pm PT exclusively on Live From Home. Fans can grab their own bottle in advance to drink along with Jon and Jesse. GRAB YOURS NOW at hamptonwaterwine.com and use the code LIVE10 to receive 10% off your Hampton Water purchase.*

Bon Jovi has also released his new single American Reckoning, a protest song about George Floyd's death, and in support of the Black Lives Matter movement. All the download proceeds from will go to support the Bryan Stevenson's Equal Justice Initiative until December 31, 2020. Watch the lyric video below.

Jon Bon Jovi and Jesse Bongiovi shared a vision to create a unique rosé and bring people together, using the essence of the relaxed lifestyles of the Hamptons and the South of France. The two created the full concept of the brand and brought on famed French winemaker, Gerard Bertrand to bring their vision to life. "The Hampton Life" is about spending time with family and friends on perfect summer days that turn into unforgettable nights. This unique rosé is made primarily from the Grenache (60%) grape variety, blended with Cinsault (15%), Mourvèdre (15%) and Syrah (10%) traditional grapes of the French Mediterranean. The wine is fresh and lively, intensified by aging in French Oak barrels for 30-60 days. Learn more at https://hamptonwaterwine.com

Founded in 2010 by Chef José Andrés, World Central Kitchen (WCK) uses the power of food to heal and strengthen communities through times of crisis and beyond. WCK has transformed the field of disaster response to help devastated communities recover and establish resilient food systems. Since its founding, WCK has served over 30 million meals to those impacted by natural disasters and other crises around the world in countries including Albania, The Bahamas, Colombia, Guatemala, Haiti, Mexico, Mozambique, Spain, Venezuela, and the United States. Learn more at WCK.org.

*Order must be placed by 8/14/2020. The 10% discount is given for a single order. Items with pricing ending in .97 are excluded and will not count toward the minimum required. Discount does not apply to corporate orders, gift certificates, StewardShip membership fees, select Champagne brands, Riedel glassware, fine and rare wine, 187ML splits, and all bottles 3.0 liters or larger. No other promotion codes, coupon codes or corporate discounts may be applied to order. Offer valid subject to state law limitations.